My goodness, it's been an incredibly long time since I last blogged.  I'm not sure there's still anyone out there willing to read my latest ramblings, but just in case, I just wanted to share this project I've been working on the last couple of days and to explain the back story....

On Friday night I went to a gig at the Acorn in Penzance of an artist I'd never heard of before to be honest - PHIL KING. My husband came across him and bought us tickets.  It turned out to be a small and intimate evening of wonderful music and lyrics - just one very charismatic young man and his guitar. 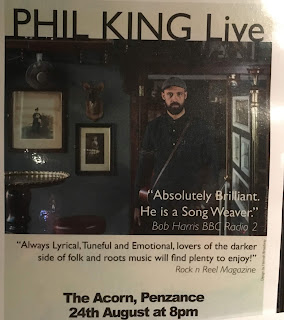 (Sorry, about the rubbish photo I took of the poster up on the wall)

During one his chats between songs, Phil told this story of having been to the concert of one of his heroes, Ray Lamontagne when he noticed that he was offering his used guitar strings for sale - and that someone was actually prepared to buy them for 50 quid.

So, almost as a joke, Phil decided to offer his strings at the end of his gigs, and to his surprise, when he announced this, a bidding war started amongst the audience.  The bidding started at the back of the hall with the offer of a pack of peanuts! That first set of strings was exchanged for 2 packets of peanuts, a scone, pint of beer and cup of tea!

Then only the previous night in Totnes, a large burly bloke offered to buy Phil's guitar strings for £20 as a love token for his partner. 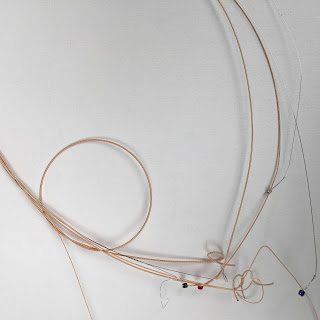 As Phil was telling this amusing story my mind went into overdrive.  I just knew I HAD to have tonights strings as an idea for an artwork was forming in my mind and kept growing and growing.  I almost had trouble concentrating on his beautiful songs as I was convinced someone else would beat me to it and I so wanted to create the painting in my mind.

But I was lucky.  The strings were mine for the princely sum of £15 and I couldn't wait for the next day to start work in my studio. 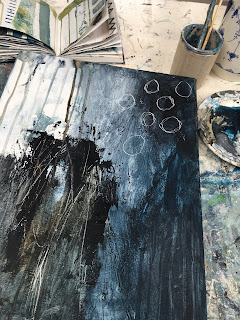 The beautifully crafted cover for Phil's CD sparked off many of the ideas I wanted to incorporate.

The choice of colour way.

The album's title 'The Wreckage'.

The gorgeous letterpress typography used on the cover.

The silhouettes of birds too....

This was my first step - painting the canvas. 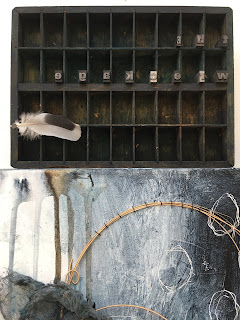 The top of the canvas has a small printing tray attached to it that I bought recently.  I knew this was the perfect painting to use it with!  It's been painted with acrylics and has metal type attached together with a feather that I'd weirdly found on the floor of my studio the afternoon before going to the concert. 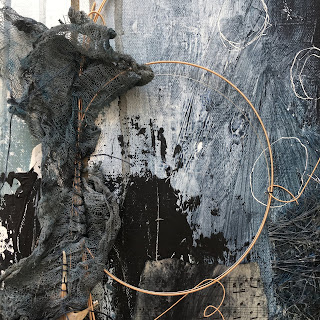 The most important element of course is the guitar strings which Phil wound together for me after detaching them from his guitar.

These are pretty much as they were when I unfurled them.

They're attached with hand stitches and wrapped with painted muslin.

And here's the final piece:
THE WRECKAGE 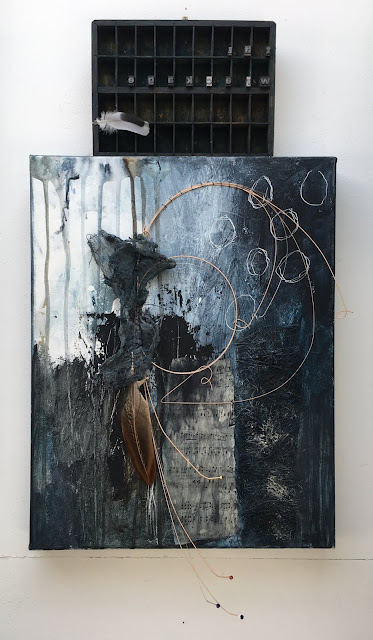 I have to say, I'm really pleased with how it's turned out and just knew I had to take the time to share the process and record it for me too.

Sally MacCabe
This is a place for me to share my new paintings and mixed media artwork as it is produced in my studio - to sometimes show the progress through to the finished peices; and also images of exhibitions that I go to and design photographs I've taken that inspire. 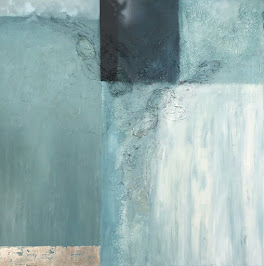 I am a painter and mixed media artist living in St Ives, Cornwall. My textured paintings and mixed media pieces are usually worked in a subtle colour palette of soft blue-greys and an important part of much of my work is the layering of surface texture with acrylic paints, various mediums and the inclusion of fragments of personal letters, various old texts and ephemera. I also enjoy including found objects, which are often foraged when out walking.
Unable to paint every day and while waiting for those 'sparks of inspiration' I like to work in other media to keep the creative juices running. I always have a sketchbook on the go and I love to be simultaneously working on altered and artists' books; papier mache vessles; exquisite art dolls and small assemblages. As a complete contrast I love producing my large range of one of a kind semi-precious beaded jewellery which allows me to enjoy colour and texture in a different way.
The full range of my work can be purchased from my shared studio gallery space in the Downalong area of St Ives - Back Road Artworks. We are open there most days (01736 791571). My work is also shown in various galleries across the country.
My work can also be viewed by appointment in my small studio space in my cottage in St Ives, where I also teach various workshops.
Sally MacCabe
6 Bullans Terrace, St Ives, Cornwall TR26 1RD
Tel: 07885079902 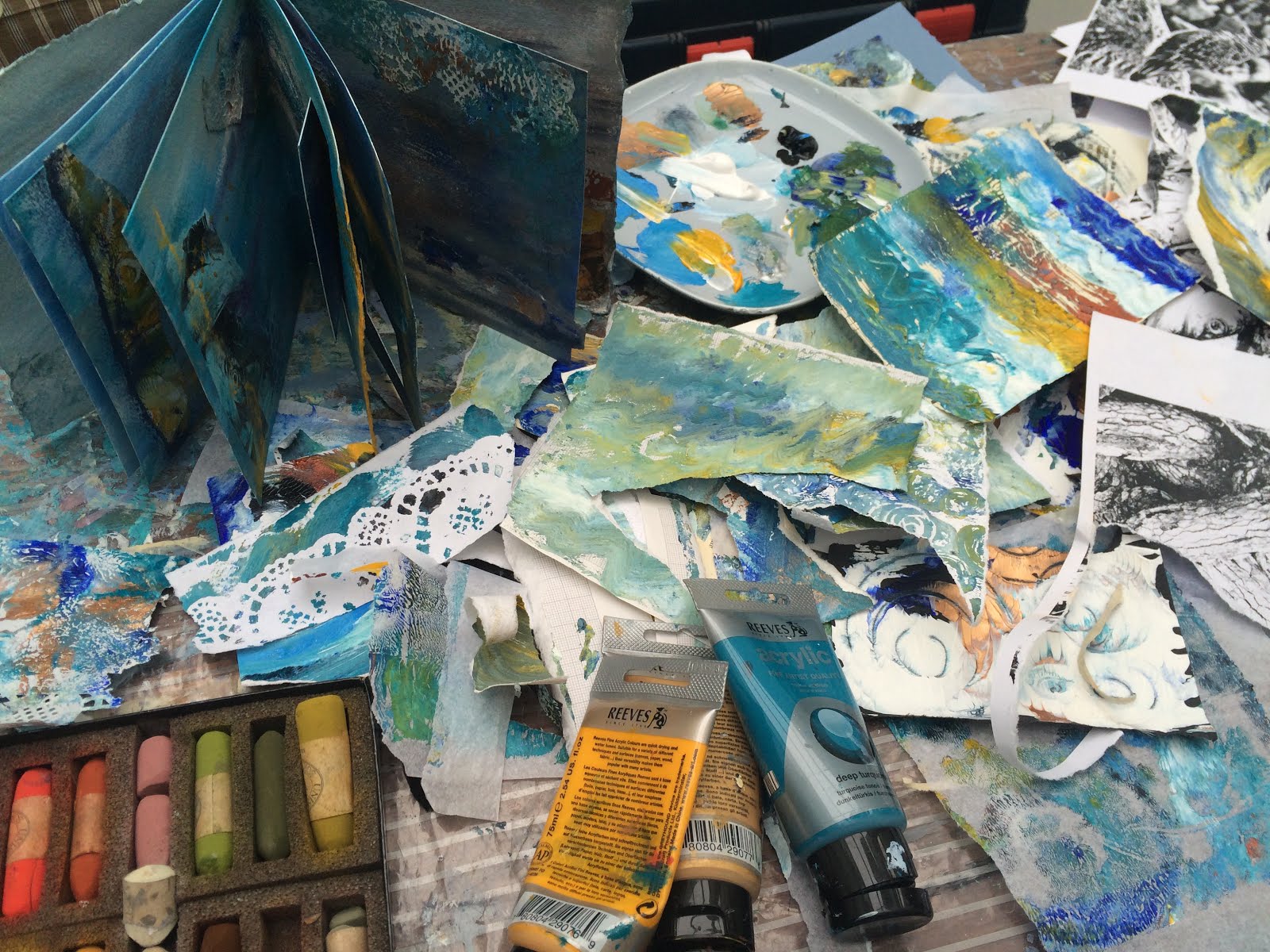 2017 SEES THE INTRODUCTION OF HALF DAY WORKSHOPS AS WELL AS FULL DAYS IN MY NEW GARDEN STUDIO. Please email me if you would like me to send you a printed leaflet.
MIXED MEDIA ABSTRACT PAINTING
Full Day £120
PLAYING WITH MIXED MEDIA
Half Day £50
CONCERTINA BOOKS
Half Day £50
SIMPLE BOOKS WITH MONOPRINTING
Full Day £120
TREASURE BOXES
Full Day £120
My workshops are for just 1 or 2 adults, ensuring very personal tuition and appropriate for beginners and experienced artists alike.
The cost of the workshops covers for a Full Day includes all materials, full cooked lunch with wine, coffee, tea and biscuits. Half days include refreshments and all materials.
The day runs from 10am to 4pm and is held in my new garden studio at my cottage in the centre of St Ives.
There are no fixed dates! The workshops are very much tailored for each individual and so you are able to request any date/day that you think would suit you best. If you would like to make a booking, please contact me and we can arrange a date.
Email: thestudio@sallymaccabe.co.uk 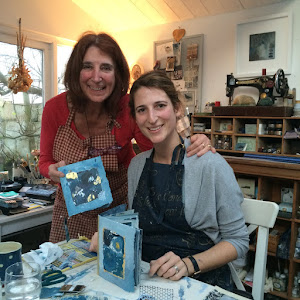 FIND ME AT BACK ROAD ARTWORKS 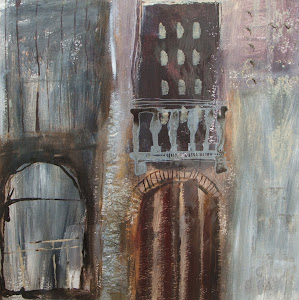 My shared studio in St Ives 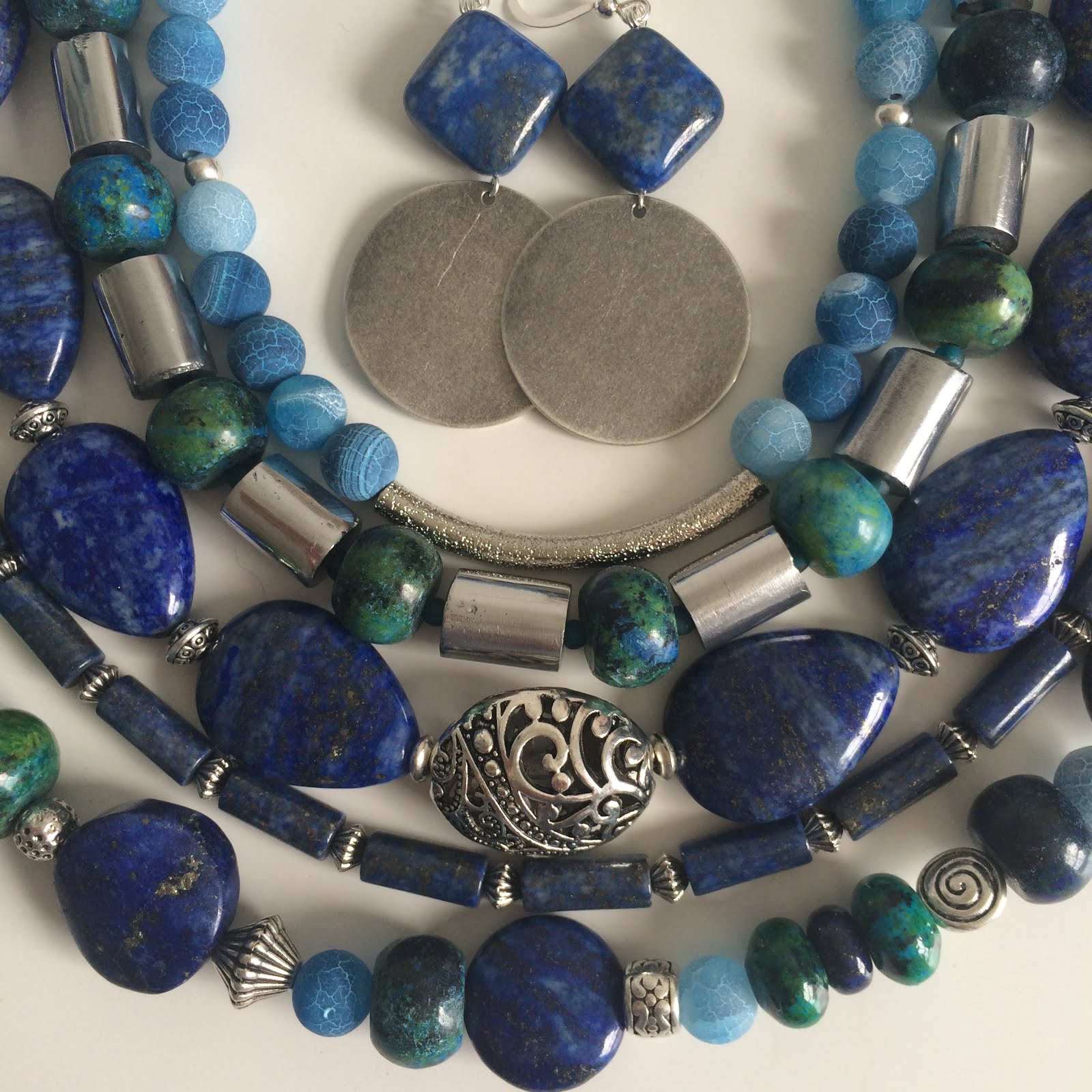 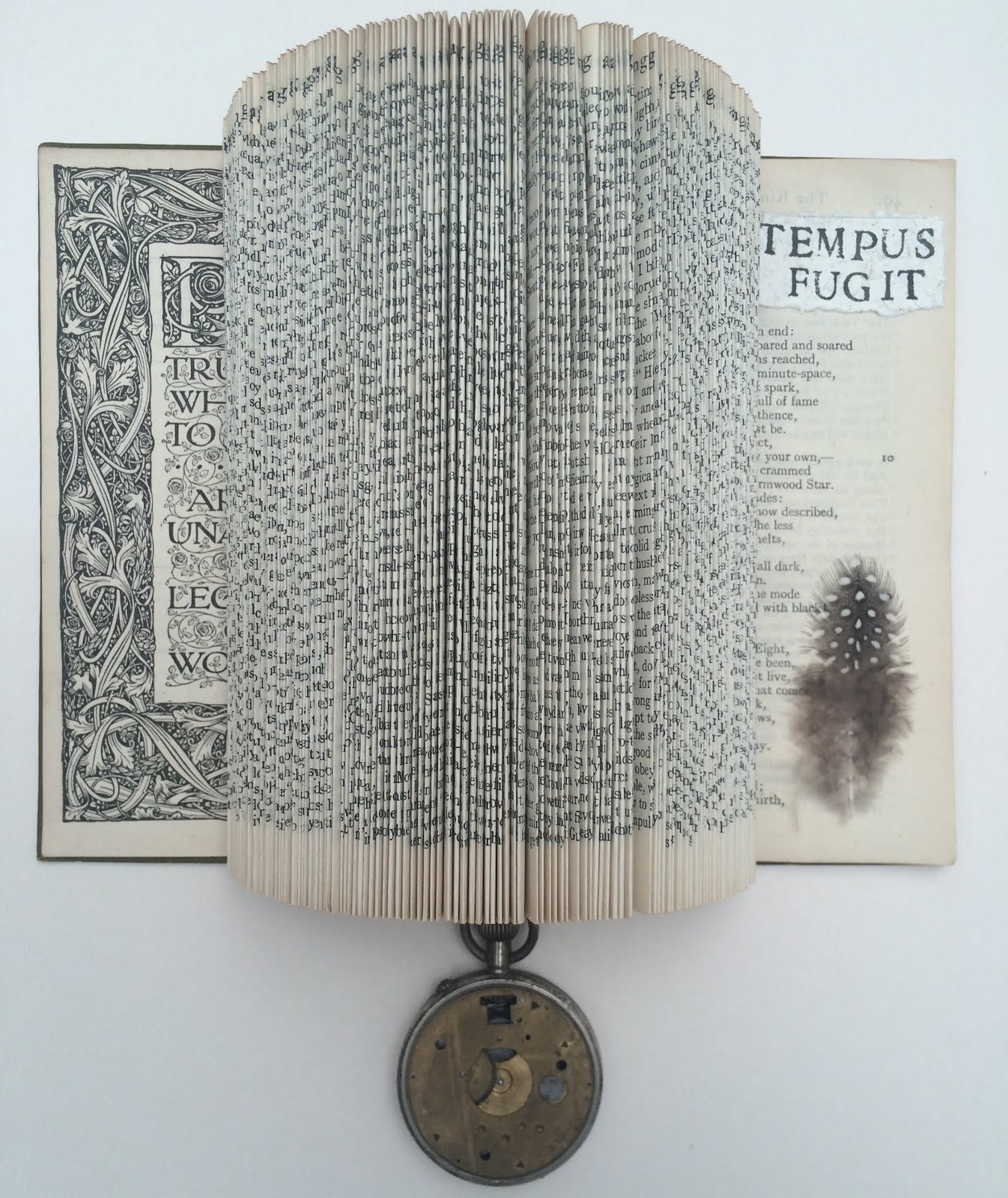 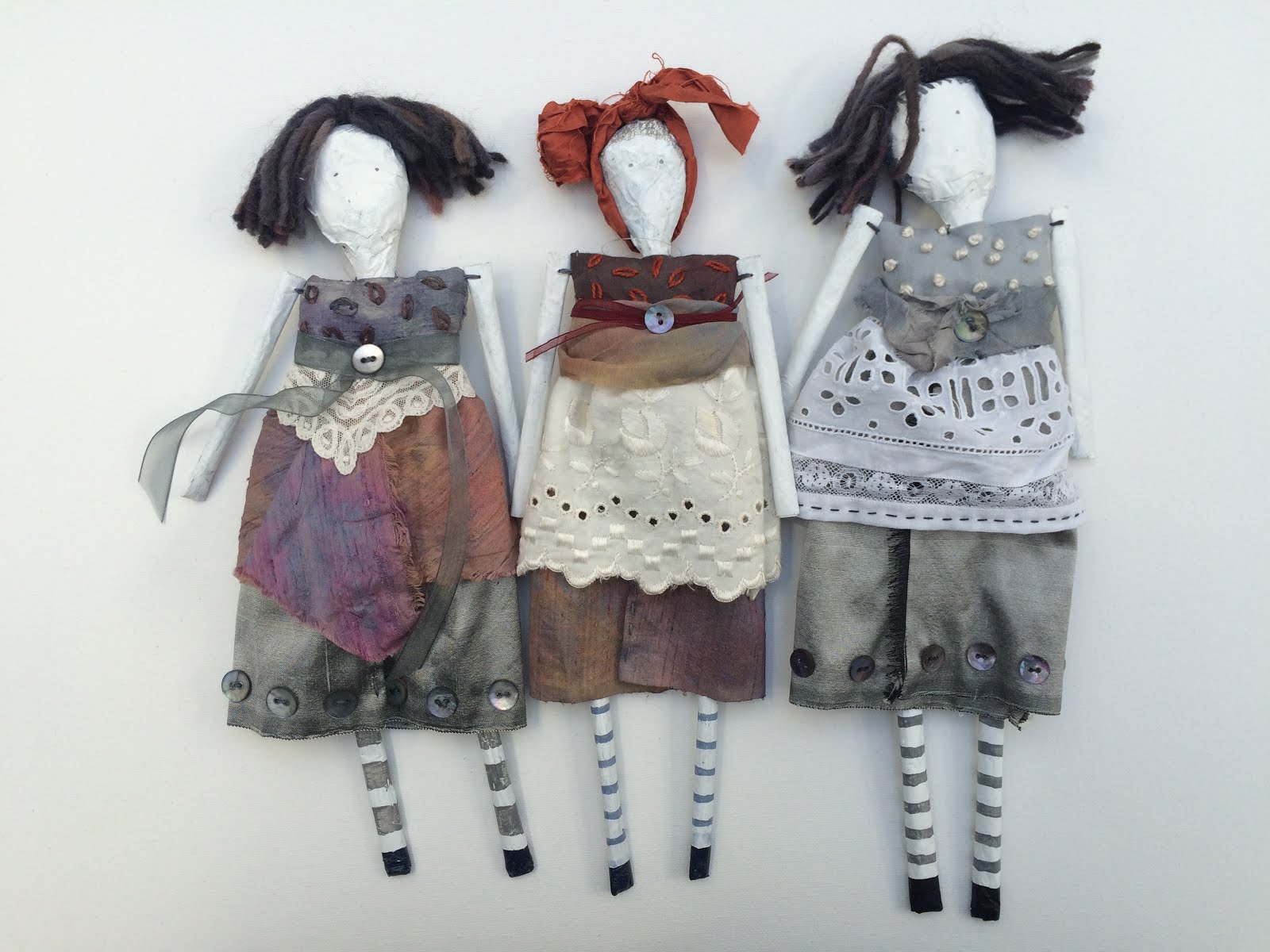